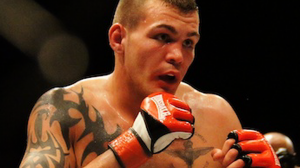 [Feb 28th] Tillery Combat Fighter  Jack Marshman (14-4), has inked an five-fight deal with Cage Warriors Fighting Championship which will see him compete exclusively for the promotion over a minimum period of 18 months.

Marshman one of the UK’s top middleweights, has taken all but two of his 14 wins inside the distance, 10 of which have come via (T)KO.

An active serviceman with parachute regiment 3 Para, Marshman is a former middleweight champion for domestic British promotion BAMMA and holds notable wins over the likes of Lee Chadwick and Andrew Punshon.

“I’m very happy to have signed with Cage Warriors and I’m looking forward to some really interesting match-ups with Europe’s premier promotion,” said the 24-year-old Welshman.

“I want to thank my superiors at 3 Para for supporting me in my MMA career and allowing me the opportunity to train full-time. Also thanks to Graham Boylan for giving me this fantastic opportunity.”