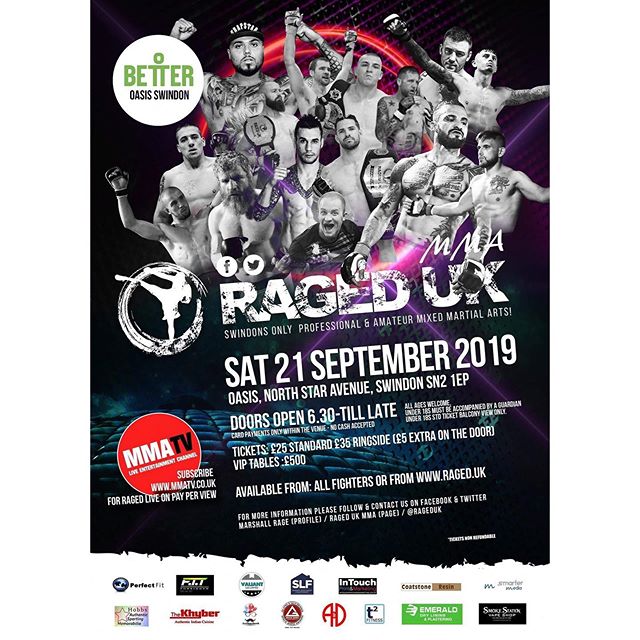 Saturday, September, 21st, 2019, RAGED UK MMA will be hosting their 11th event at the Oasis Leisure Centre, in Swindon.

For the first time, you can live stream the event, as they will be making the event Pay Per View on streaming service mma.tv.co.uk.

Not only content with being one of the South West’s most prominent MMA events, but they have implemented two new weight divisions, fighter safety is paramount.

“Adding new weight divisions opens up a wider range of fights for matchmaking, however, more importantly is fighter safety” said promoter Gary Turland adding “I’ve seen a few injuries along with fighters becoming dehydrated after cutting a lot of weight so as a promotion we are trying to make things a bit safer”.

With ‘Raged’s’ inaugural event which took place under the name of ‘Caged’ on Saturday 5th October 2013 and had just eight fights on the card.  Michael ‘Gip’ Cutting won the belt against Shane Mansfield in the third round via armbar.

“MMA TV has been around for just over 4 years, it’s recognised as one of the top streaming platforms for mixed martial arts” COO Sid Deans stated “it is also trusted for its High Definition streaming and ease of use.

” You can purchase live pay per views, and you can also subscribe for live MMA events and videos on demand, just hit the button on the mmatv.co.uk website for subscription or click on the event for the pay per view.  It’s easy to use and has a lot of events and additional content to watch.”

Limited tickets are still available from www.raged.uk or at the venue itself which will incur a surcharge of £5 each for paying on the door. (cash is accepted on the door).

Please note the venue is CARD PAYMENTS ONLY at the bar