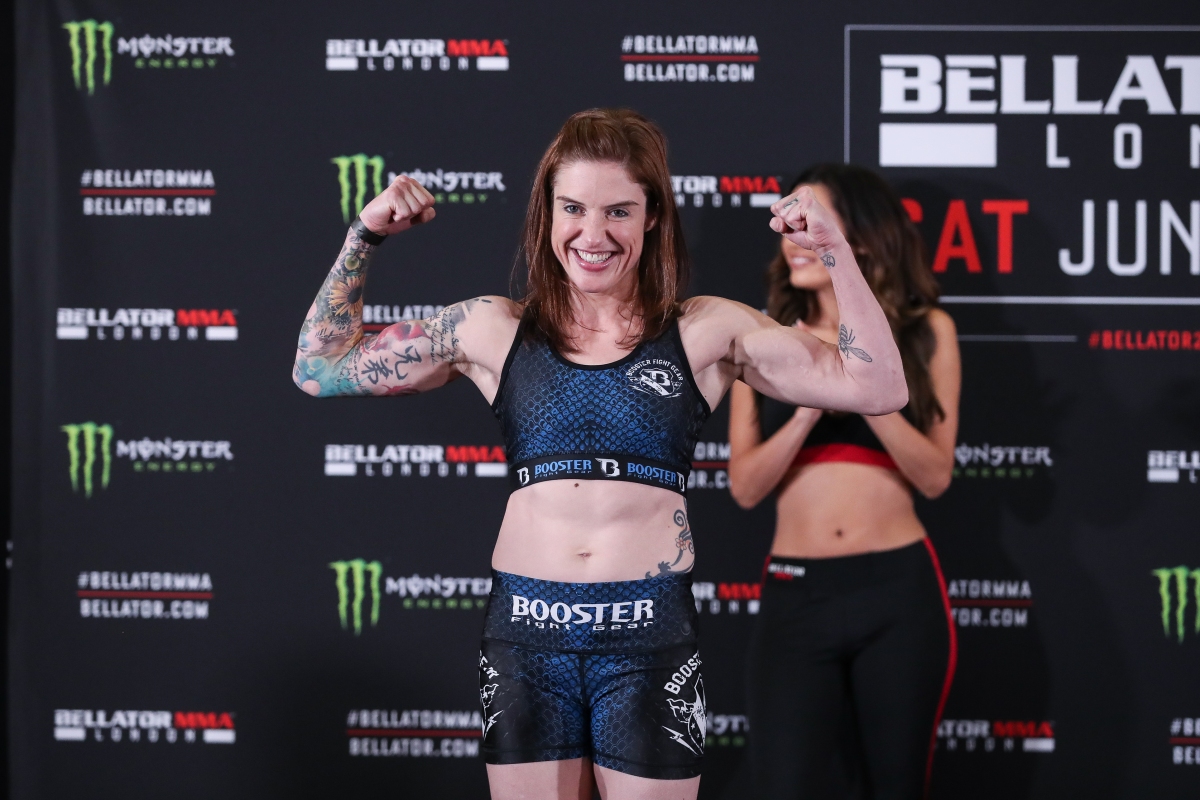 On Saturday, June 22nd, 2019, Bellator MMA will be making their return to the SSE Arena in London.

Making her debut for the promotion will be U.K’s Bryony Tyrell, and if you had told her six years ago that she would be on one of the world’s largest MMA promotions and competing in front of her home crowd, I’m pretty sure she’d be laughing at just the thought.

Born and raised in Sevenoaks, Kent, Bryony has always enjoyed the thrill and excitement of extreme sports; from BASE jumping, Bungee jumping, and sky diving, to testing herself in mixed martial arts.

Holding a Masters Degree in nursing and a Degree in Molecular Cell Biology, the critical care nurse now based in Southampton has always had a passion for martial arts.

Starting in Kickboxing and Kung Fu 19 years ago, Bryony quickly fell in love with all aspects of martial arts so much, that, she added in Krav Maga, Japanese jiu-jitsu and Muay Thai before finally concentrating on Wrestling and Brazilian Jiujitsu, forming the mixed martial arts career she has today.  “Martial arts are my passion in life.  I love the contrast that they can be beautiful and deadly at the same time” Bryony said. “Anyone that practices a martial art to a high level knows that it involves incredible dedication and discipline, and also pushes your body and mind to the limits of endurance.”

Originally part of U.K MMA pioneer (and ex UFC athlete) Rosi Sexton’s mentoring scheme, Bryony went about taking Rosi’s advice on training, nutrition, competing and training with Rosi. “I was very privileged to be on a mentorship scheme with Rosi. I gained invaluable advice at the beginning of my amateur career” said Bryony.

The 18th of May 2013 is a day that Bryony will forever have as a fond memory. It was when she made her amateur debut and found out exactly what she is capable of in the cage. “I think the only way to truly know how good you are at fighting is to compete. Being locked in a cage with another trained fighter who can use pretty much any style or technique against you is the ultimate test”,  Bryony said when recalling the first time she stepped into the cage.

Not only content with competing in amateur MMA bouts, but Bryony also tested her skills by competing in white-collar boxing bouts, Muay Thai bouts, and grappling matches to gain invaluable experience before turning pro in November 2015.

Holding a current professional record of 4 wins 3 losses and 1 draw, with all 3 of those losses coming from title fights with two of those athletes currently competing in the UFC and Bellator, Bryony is no stranger to adversity in the MMA industry.

Having started in her MMA career aged 33, Bryony was considered by some promotions and coaches to be ‘too old’ to be competing in the sport.  Once Bryony turned pro at the age of 35 and started to win, it was only then that she began to believe in herself more and knew that ‘age was just a number’.  At least, to her anyway, and she set about proving just that.

Having gone 4-3-1 in her pro career, taking short notice fights and a title fight in a weight class above her usual weight division, Bryony felt that her current gym, Exile, had let her down. “I felt like the industry had written me off for being too old, and some of the coaches at my gym had said I was too old and slow after I lost the Cage Warriors title fight against Molly McCann.  When they wrote me off because of that loss, I didn’t think that was fair.  It was quite demoralizing for me.  The whole experience was quite demoralizing, and I just stopped the enjoyment of the sport.

On top of that, Cage Warriors wouldn’t give me a fight at strawweight, and I felt I was not valued as a fighter, and not being given significant opportunities.  It just wasn’t worth the sacrifice anymore. So, I decided to retire in July 2018.”

Since retiring from competitive MMA, Bryony thought that she’d feel better because of the less stress involved and would have more time to spend with her husband and two children.  However, she felt like there was a massive hole in her life and felt very down, having nothing to work towards with the Adrenalin rush that she always knew she had.  “Having just a normal life is not good enough for me.  I know it is quite a selfish attitude to have especially the fact that I have got young children and an amazing husband and a stressful job.  I need that buzz to make me happy.”

Looking to replace that ‘buzz’ Bryony decided she would concentrate on achieving the top levels in grappling.  After taking home silver at the IBJFF and silver at the UK ADCC, she didn’t have the same drive for grappling as she did in MMA, stating that “I didn’t put 100% in because I just didn’t have that kind of fear factor that someone is going to smash your face in if you don’t train properly, and it wasn’t dangerous for me.”

On May 30th, 2019 it was officially announced that Bryony had come out of retirement and will be competing on the Bellator London card on June 22nd at the SSE Arena, where she will face the current kickboxing champion Denise Kielholtz in a flyweight MMA bout.  A fight that has been over a year in the making, as Bryony initially accepted a short notice (1 week) fight against Denise back in February 2018 but had to withdraw due to being medically suspended after her fight with Molly McCann.   It was suggested to Bryony that Denise wasn’t matched up for the London card and did she fancy another fight.  It was at that point that Bryony messaged her managers, who then contacted Bellator, and they came back with a yes straight away.

With ten weeks to prepare for the bout, Bryony went to Cross Face gym in Watford, training with head coach Dave Lee and Charlie Leary who is also on the London card. For the final two weeks of her training camp, Bryony flew out to Thailand to train at UFC athlete Johnny Walker and Leo Gosling’s new gym Chokchai Muay Thai. “While Johnny and Leo were here in Southampton, I trained with them, so it made sense for me to go out and spend two weeks over at there new gym in Thailand.  They have a few UFC athletes training there, and Jorge Kanella who is also on the London card.  Being surrounded by world-class coaches and fighters, this fight camp has been on a different level to any other I’ve had.  They treat me as an equal, and I’m keeping up with these guys who are top-level pro fighters, so it’s been a massive confidence boost to come back to fighting after people had written you off.  I’ve got some amazing people around me that believe in me, and I know I can win this fight.”

With the advantage of having 16 MMA fights compared to Denise’s 4 MMA fights, and factoring in that Denise is Bellator’s kickboxing champion and has had numerous kickboxing bouts,  Bryony realises that Denise is a superb striker,  having watched a lot of her fights just purely to learn from her and improve her own striking.  She is also a classy athlete and represents the sport incredibly well.

Feeling that this is a good match-up and an opportunity Bryony had been asking for throughout her MMA career, she now thinks that having dedicated her life to MMA and competing for the last five years, come June 22nd it will have paid off.

With the fact that Denise is a world champion kick-boxer, Bryony knows that it is unrealistic to think she could beat a multiple world champion striker on her feet, and therefore feels Denise will probably think that Bryony will want to get her to the ground as that is where she tends to do best.  “She will be physically stronger than me and be powerful so it will be down to see who can implement their fight game, as always in MMA.

“It’s going to be a fair fight as we both have had a good preparation for this bout.  I think I am probably going in there as the underdog and that’s fine with me as that’s normal, but the nice thing for me is she may well be a top striker in Bellator and the promotion, but we are fighting in London in front of my home crowd,  which is nice for me because it’s rare that I get to fight  in front of a home crowd.  It is going to be amazing to have support there, and I’m also fighting on the same card as good friends of mine, Kate Jackson, Charlie Leary and Jorge Kanella, and Johnny and Leo are also going to be there.  It is going to be amazing.”

Aiming for a submission win, Bryony has one last thing to say.  “Last year my fire went out, this year it’s back with a vengeance! I am incredibly honoured and grateful for this opportunity on the world stage against such an impressive opponent. I got written off as a fighter.  This year, I’m training alongside Bellator and UFC athletes treated as equal. Don’t let anyone crush your dreams if you surround yourself with the right people you will succeed!”