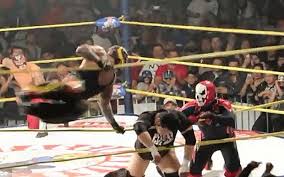 The following is actual live footage of what happened to Pedro Aguayo Ramirez before his death, whilst wrestling at a Pro Wrestling event called ‘The Crash’ with former WWE Wrestler Rey Mysterio.

Rey Mysterio had already set up his infamous ‘619’ move when this tragic accident occurred.

Please note that by posting up this video, it is meant in no way, shape or form, as showing any disrespect whatsoever.

The fact that wrestling is ‘fake’, just could off made officials act, quite possibly a little quicker in thinking that there was a major accident, in my opinion, since everyone including the referee thought it was ‘part of the act’!