Adam Little is a 26 year old amateur fighter from Swindon, who at the weekend will be making his home town debut at local MMA promotion RAGED UK.

Adam who is currently 2-0 and trains out of SVT/Scorpion Gym in Swindon and works full time, decided to push his own career one step further and co-train in London at Titan gym at his own expense to get the best out of his training, it also happens to be the home of UFC fighter Brad Pickett and Joseph Duffy, along with BAMMA fighter Ashleigh Grimshaw.

I got to speak with Adam about his up coming fight this Saturday, where we talk about his boxing, wrestling, Brad Pickett, plus some other exciting stuff…..take a look! 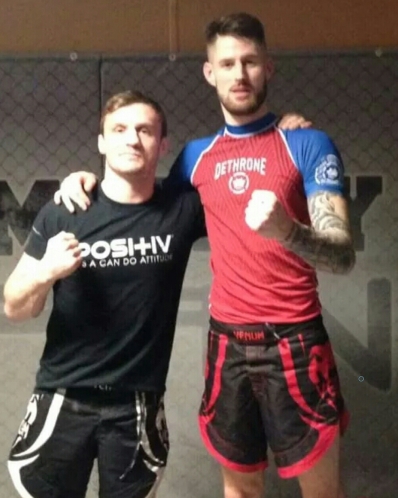 It’s been a while since I have caught up with you, which was when I last saw you fight at ITC 8 against Wayne Alden where you won in a stunning 0.48 second TKO (GnP) victory.  Can you talk me through what you have been doing since then.

Since ITC 8 I felt that my boxing and takedown defence was lacking leading up to that fight so I went  away and worked on that area of my training.

I have  had a couple of white-collar boxing fights in which I have won, in turn I feel that my stand up game has improved massively.

I now feel confident in myself in the areas that I have been working on, especially my wrestling aspect of my game. I just feel like I have managed to evolve my whole fighting style adding in a lot more technique to my arsenal of weapons, to fully complement what I already had in my skillset.

Working full-time, training here in Swindon at Scorpion Gym/SVT and finally finding another home at Team Titan in London.  How do you find enough hours in the week to fit everything in?

It can be an extremely long week but I’m thankful that I have a good employer who lets me take time of when I need to, especially when I am in a fight camp. I also try to fit in my runs, cardio before work in the mornings so I can focus more on technique and actual fight training in the evening.

For you then, this ultimately is a long-term career plan?

For sure, I’m not here just to make up the numbers im here to win fights. I’m looking to get a few more wins under my belt and compete a lot more regularly.

If everything goes to plan and this time next year I’m still doing well then I will speak to my coaches and see where we are all at.

You’re facing Reece Pearson this Saturday, March 7th on RAGED UK at the MECA in your home town Swindon, which will also be your first time fighting in front of a home crowd. How are you feeling?

I’m feeling brilliant leading up to this fight. My training has been the best it ever has been.  I can’t wait to get in there and show everyone watching what I can do.

Being the home town fighter, on home soil, how much does it mean to you to have support behind you?

The support is brilliant. My other fights have been out-of-town so it obviously makes it a lot harder for people to attend. This time I will have all my friends and family there and I’m sure they will raise the roof for all of the homes fighters on the card.

Training out of Swindon’s Scorpion Gym and SVT, you get to train with a wealth of combined knowledge in Michael ‘Oz’ Osbourne and Dan Hughes, along with Saturday night’s two main event fighter’s Phil Wells and Alex Brunnen.  What is it like training with all that combined knowledge in your local gym?

It’s brilliant training with guys like that. They’re not just coaches they have been there and done it. I’m learning more with every session and I can not thank them enough, as well as the other lads for the time and effort they’ve put into my fight preparation.

You also stated Team Titan is part of your home aswell, which is also home to UFC fighter Brad Pickett, newly signed UFC fighter Joseph Duffy and BAMMA fighter Ashleigh Grimshaw amongst many other elite athletes to say the least; Is it quite fair to say that this training camp for your upcoming fight is going pretty well then?

Yes the training camp is going brilliantly. Everything has gone to plan and the lads in London are all at elite level. Even the amateurs down there are champions and as far as I’m concerned being on the mats with people like them is priceless.

Being mentally prepared for a fight I would say, is as paramount as much as the physical aspect of training, if not, more so.  How much do you believe in having a strong mental attitude for your fights?

I think that mental strength and toughness is a massive part of the fight game. With the lads that I train with at both SVT and Titan I don’t think you have any choice but to be mentally tough and ready. Oz and Dan wouldn’t have it any other way.

Do you know much about your opponent Reece Pearson or the challenges he could pose on the night?

I don’t know a great deal about Reece, I leave that up to my team to research him but I do know a lot about myself!

Lastly, is there any sponsors or anyone you would like to thank?

I’d like to say a massive thanks to Oz and Dan down at Scorpion/SVT, as well as all of the other lads in the gym. Also want to say a big thank you to Brad Pickett for looking after me and making me feel so welcome down at Titan. Dave Pixton, Pat Reeves and Jaime Murkin at Gracie Barra Swindon.

Lastly I want to say a massive thank you to Picture House Tattoo Studio in Chippenham for giving me some great tattoos, Better Option and Platinum Security for helping me out with equipment.

You can keep up to date on Adam on his Facebook page here.

Tickets are £20 and £40 VIP available from all fighters, The Forum, The Khyber; alternatively  you can buy online at  www.swindontickets.co.uk or  click on their social media pages Facebook/Twitter.

Tickets will be available on the door (subject to availability)

Photo Credit 1 and 2: Adam Little/Tear Up