On August 16th, Lauren Murphy will make her long-awaited UFC debut where she will take on former UFC title contender Sara McMann in the women’s Bantamweight division.

McMann [7-1, 1-1 UFC]  is an Olympic Silver Medalist who will be looking to seek to put herself back into title contention again after her last outing with Ronda Rousey ended in a 66 second defeat.

Murphy, who is 8-0 in her MMA career, with six of those wins coming by T/KO victories and two via decision wins. Murphy’s first, five fights never made it into the third round and were all T/KO wins. On December 7th 2013, Murphy won the first ever inaugural Bantamweight Belt for promotion InvictaFC after defeating Miriam Nakamoto in the fourth round via TKO, before relinquishing the title to sign with the UFC.

I managed to catch up with Lauren for a quick chat about how the UFC offer came about, her new home in Arizona, new training home at The MMALAB and when we will get to see ‘The Lauren Murphy Documentary’ amongst others.

What made you say ‘right the time is now for UFC’, after all you are the Invicta Bantamweight Champion – or was it a case of the UFC came to you with an offer [the offer you had been waiting for] after finally noticing that you should be in the UFC?

I had an offer previously with the UFC, to take a short notice fight last year. I decided not to pursue it at that time, because I was not ready. I also did not pursue the Ultimate Fighter, because at that time, I wanted more experience before getting a fight in the UFC. Therefore, there were a couple of times when there might have been an opportunity to go to the UFC, but the time was not right. Then this last year, Invicta had a long time between shows and we were not really sure what was going on for a long time, so we started looking into our options for the UFC- much the same way several other champs in Invicta have. When Sara needed an opponent, I think I was the only one willing and healthy that made sense, so Sean Shelby called Shannon and off I went.

You have just moved to Arizona. How are you finding it having your family complete and with you since Joe is now retired from the Air Force. Is it great to be together all the time (so to speak) whilst just celebrating your first year of marriage and having your son Max with you?

It IS great! It really is nice to wake up next to my husband everyday. That is why I married him! There are some things we have to adjust to, of course. When I would do camps in Houston by myself, I learned how to handle bad days and good days alone. Now I have someone who loves me right there with me to share that with, and I think that is an adjustment for Joe. I also have a little more to worry about. In Houston, I could go home, make my own food, get in bed, watch something on Netflix and call it a day. Now, I have to make sure Max is ready for the next day, get dinner ready for everyone, make sure the laundry is done. I have a much bigger house to keep clean. Before, I was just renting a tiny room. All the same stuff people deal with when they have a job and a family. Before, when I was on my own, I could just worry about myself. I could afford to be very selfish that way, and now I cannot. Joe does a TON around the house while I train, but it is still an adjustment for all of us to some extent.

You moved training camps to The MMA LAB in Arizona, was this to start preparing for the fight that has just been announced or was it for other reasons?

No, I was not even in the UFC when we decided to move. My long time coach in Houston decided to move his family to Virginia to be closer to his extended family, and when he left Texas, I decided to look for a new gym. I just figured it was a good time to go to a big gym with a big camp. There are pros and cons to every situation, but I came to the Lab to see if I would like it and just fell in love with it. Therefore, when Joe was released from the Air Force, we decided to set up shop here. We wanted a place that had a strong coach, a good gi program for jiu jitsu, and had a family-like and family-friendly atmosphere. The Lab has all those things, plus a kick ass team in a great location. We are very happy here.

With the news breaking that you are now signed to the UFC and also on the same day that you would not have to wait long for your debut, as you will be fighting UFC ranked number 4 Sara McMann on August 16th in Maine; At that point with it now being ‘public’ knowledge, is it becoming more real to you, that you have now made it to the UFC?

Ha! Most days I wake up and am in awe of where I am at, but I felt that way before I signed to the UFC. If I start really thinking about it, my whole life has been pretty surreal. The UFC is just one more loop on the crazy roller coaster of my life 😉

‘Lauren Murphy fans’ who know you, know that whoever your opponent is, you will go into the octagon and fight 100%. What were your initial thoughts when you knew it was Sara McMann that you will be facing as your first UFC opponent?

I am really glad the UFC gave me a tough fight to begin with. I like being the underdog. I am so honoured to fight one of the best women in the world! I also know I can beat Sara. I do not know if I will. But I know I can if I work hard and go out there and perform to the best of my ability. 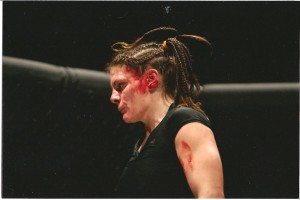 What are you expecting from your first UFC debut – in terms of being on the biggest stage for MMA, pre-conceptions if any or will it be business as usual?

Someone told me to remember, “It’s just another cage.” I like that. There might be a few more cameras, a few more lights, a few more people in the audience, but there is only one opponent, and she is human just like me.

How do you think you will ‘deal’ will the added side of the business that comes with being in the UFC – doing the media days and open public displays on fight week? Would you like to just concentrate on what you are here for and that is to get in the octagon and show why you are in the UFC?

The media days, interviews, and what not is just a part of the job. It is a challenge. We are at a level now where these things are done, so what is the point of liking it or disliking it? I go in to it like anything else, to do my best, and whether I like it or not, is actually not even really relevant to me ha ha ha.

When can we see ‘The Lauren Murphy Documentary’ as I for one am so looking forward to seeing your journey so far on DVD?

I think it is now planning on being released about a week before my fight? I have just signed all the gloves we are shipping out and those will come to donors soon. The release date is not set in stone, and I do not think it needs to be at this point. I have talked to the film’s producer and we agreed it should probably be released before the 16th of August, so it can generate some interest leading up to the fight.

The film editor experienced a sudden death in his family, and he needed some time to process that a little. I cannot imagine having something like that happen and then trying to work. My heart hurts for him 😦

Thank you for your time, it is always a pleasure, lastly anyone you would like to thank?

I always thank my husband for being so awesome 🙂 and I want to thank my manager as well, Chuck Wichert. He has been amazing and he always takes great care of all his fighters. Also to the team at the Lab, thanks for working with me so much. And to all my fans and family and friends that have supported me through all this craziness, thanks to you 🙂 It means everything to me.

You can watch Lauren Murphy in her debut UFC appearance on August 16th UFC Fight Night: Bader vs Saint Preux, which takes place at the Cross Insurance Center in Bangor, Maine. It is also available free to view on the  FOX  Sports 1 network or BT Sports in the UK.

If you want to get better acquainted with Lauren Murphy, you can now see her last three fights on the UFC Fight Pass network under the Invicta FC library, starting from Invicta 5 where she competed against  Kaitlyn Young.  What better way to start your free 7 day trial than now!

If you missed my two-part in-depth interview with Lauren I covered last year you can read them here: