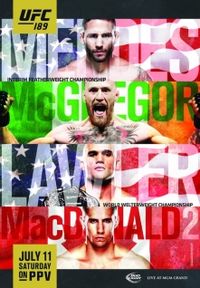 UFC 189 came live from The MGM Grand in Las Vegas last night where ‘The Notorious’ Conor McGregor defeated Chad ‘Money’ Mendes in a ‘bloody’ two round war to become the new Interim Featherweight Title Champion. In the co-main event it was ‘Ruthless’ Robbie Lawler who held onto his welterweight belt in what was to be a five round ‘bloody’ battle from Rory Macdonald.

Here are the results from the rest of the card: