It was the Superfight we was all waiting to watch, UFC 183 Diaz vs Silva and I must admit, watching the five round fight, go five rounds, was something spectacular, in a good way!

Nick Diaz played his part perfectly, with a game plan at times that was just so ‘Nick Diaz’. Unfortunately it was not to be his night as Anderson Silva took the Unanimous Decision by the Judges. 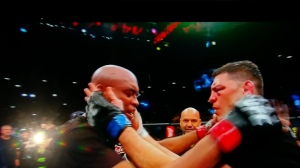 Derek Brunson Def Ed Herman  via TKO 0.36secs Round One