From the Archieves on 6th June 2014, I spoke with Michael ‘GIP’ Cutting before his debut BAMMA fight against Ed Arthur.

Saturday 7th June 2014 at the O2 Guildhall in Southampton, Michael ‘Gip’ Cutting (5-1) will make his debut for promotion BAMMA for part of their ‘Fight Night’ Series.

Cutting a 23-year-old father of two who lives in Andover, Hampshire, started Mixed Martial Arts at the age of 17 “I started because I had anger issues and liked watching martial arts films. I wanted some discipline from the sport”.

In May 2008, he went down to his local club, KYOUKEN MMA in Andover and started channelling all his aggression into the new found love of Mixed Martial Arts, training in traditional jiu jitsu and MMA. Training for two years, he then had his first amateur fight in 2010 which was against Nick Parcker for which he realised he had a talent for the sport.

Speaking of Cutting’s fighting career, like with all things, you learn not to believe everything you read on the internet as it is not always correct, so I ask Mike to break down the record that Sherdog.com holds for him as a fighter, which is 4-2, and the one thing he states is that, it is in correct, he is infact currently 5-1.

Mike explains, “The fight with Russell Peacock was a Semi-Pro fight, therefore should not be on my Pro record. On October 5th 2013 I fought ‘Sugar’ Shane Mansfield in Swindon on a show called CAGED for The International CAGED Championship Title for which I won due to a Verbal Submission of an armbar 3mins 06secs in the 3rd round, the promoter of that event still appears not to of sent the results of to Sherdog.com to get my record updated so unless people actually ask me for my record you will only ever get what is on the internet”.

Throughout Cutting’s fighting career, he has fought at various weight categories including 70kg, 66kg, and 61kg but now has his sights firmly on the bantamweight division “This is my home till I reach the top of the rankings”.

Being able to train full-time, as a full-time fighter is a privilege in itself, especially when you have a team member like Alexei Roberts to train with. Getting to find out that they will be on the same card together, must also be a comfort knowing that both of the athletes will be in training camp together, being able to push and motivate one another “It’s awesome when you have the ‘BOOM’ in the room and on camp with you”.

Winning Gold in The English World Jiu Jitsu Championships in 2013 in the 67kg Division appears to have put Cutting back onto a winning streak. Since his last loss to Aaron Blackwell on May 18th 2013 when Blackwell won the ITC 8 Bantamweight Title after a five round fight, he then won the International CAGED Championship Belt against ‘Sugar’ Shane Mansfield due to a Verbal Submission of an Armbar and his most recent win was against Jason Jenkins who he defeated via Inverted Heel Hook 2mins 28secs Round one, which was very impressive and yet another submission win on his record.

Next up for Cutting is Ed Arthur on June 7th 2014 in Southampton at The O2 Guildhall for promotion BAMMA, for which he will will be competing on one of the UK’s biggest promotions “It’s a true privilege to be fighting on a big platform”.

Ed Arthur is not only unbeaten in his pro record [3-0] he has also won all six of his amateur fights, is there any added pressure on Cutting? “It doesn’t bother me, I’m better than him, in all areas, this is my fight and I’m taking the win”

It’s pretty fair to say that Ed Arthur definitely is not one to hang around come fight night, he usually comes in fast and the majority of his fights are over within the first round, with the exception being his last fight which went into the third round. I wondered if there was any chance of this fight going the distance? “I’m putting him to sleep in the first round, sleep tight”.

For the first time BAMMA will also have Amateur fights on the same fight card to start off the show, this will include another Team KYOUKEN Member Andy Hannon, it appears Team Kyouken will be having their own little family unit up in the O2 Guildhall come fight night, let alone family and friends.

In closing Cutting does not mince his words as he offers “I would like to thank my sponsor IMPACT LPA, all the team at kyouken, my family and friends and thanks to ED ARTHUR for the easy win”

Unfortunately Michael Cutting did not get the Win. Ed Arthur Won Via RNC 1 min 58 secs Round Two. 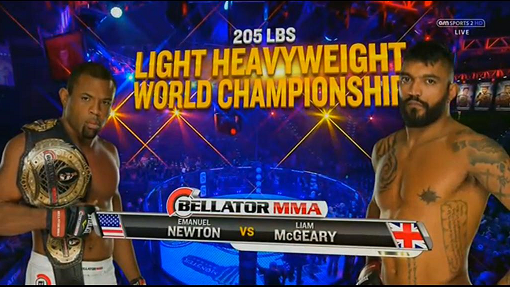 Liam McGeary is set to become the first Brit ever to claim a major MMA world championship as he challenges Emanuel Newton for the Bellator light heavyweight world title in Conneticut, USA, this month on February 27th at Bellator 134: McGeary vs Newton will go down at the Mohegan Sun arena in Coneticut topping a bill stacked with British fighters, aptly named ‘British invasion’.

British banger McGeary, originally from Andover, started his martial arts career in the channel island of Jersey and now fights out of Renzo Gracie’s MMA academy in New York.  Should he win, he will be the first British fighter to claim a major world title in the sport in what would be only his tenth professional fight.

Undefeated at 9-0 (6-0 Bellator) with all of his Bellator wins coming inside the first round, he is widely touted as the man to take the strap from the significantly more experienced Newton (25-7-1) who holds notable wins over ‘King Mo’ Lawal, Attila Veigh and Joey Beltran.

McGeary is yet to see the second round since signing with Bellator, boasting two submissions and four knockouts, with the average time it takes him to dispatch his opponents coming in at under 2 minutes.

He blew through Bellator’s Light Heavyweight tournament and earned himself a shot at the gold by defeating American Top Team product Kelly ‘Crossface’ Anundson in the final via spectacular inverted triangle, a move which earned him Inside MMA’s ‘Submission of the Year’ award.

Last month all the British fighters on the card, which McGeary is headlining, converged at the Channel 5 television studios in London to promote the event and answer questions from the national MMA press….

“I really don’t know how he’s going to back that one up” said McGeary when told that Newton dismissed him as a worthy challenger and stated that he refuses to be beaten by a Brit. “I am going to beat him up everywhere, I won’t let any chances slip and the belt is coming back to Britain – I just can’t wait (until February 27th) to stop having the fight in my head and have it for real!”.

When asked about the ‘British Invasion’ event and fighting alongside his countrymen Paul Daley, Linton Vassell, Michael Page and James Thompson, McGeary stated – “It’s an honour to represent my country alongside these guys – On February 27th we are gonna show these yanks just what us Brits can do!”

‘British Invasion’ goes down at the Mohegan Sun arena in Uncasville, CT, USA, February 27th and the world’s MMA press will be on hand to see if McGeary can overthrow Newton in his backyard and bring the belt back to British shores.