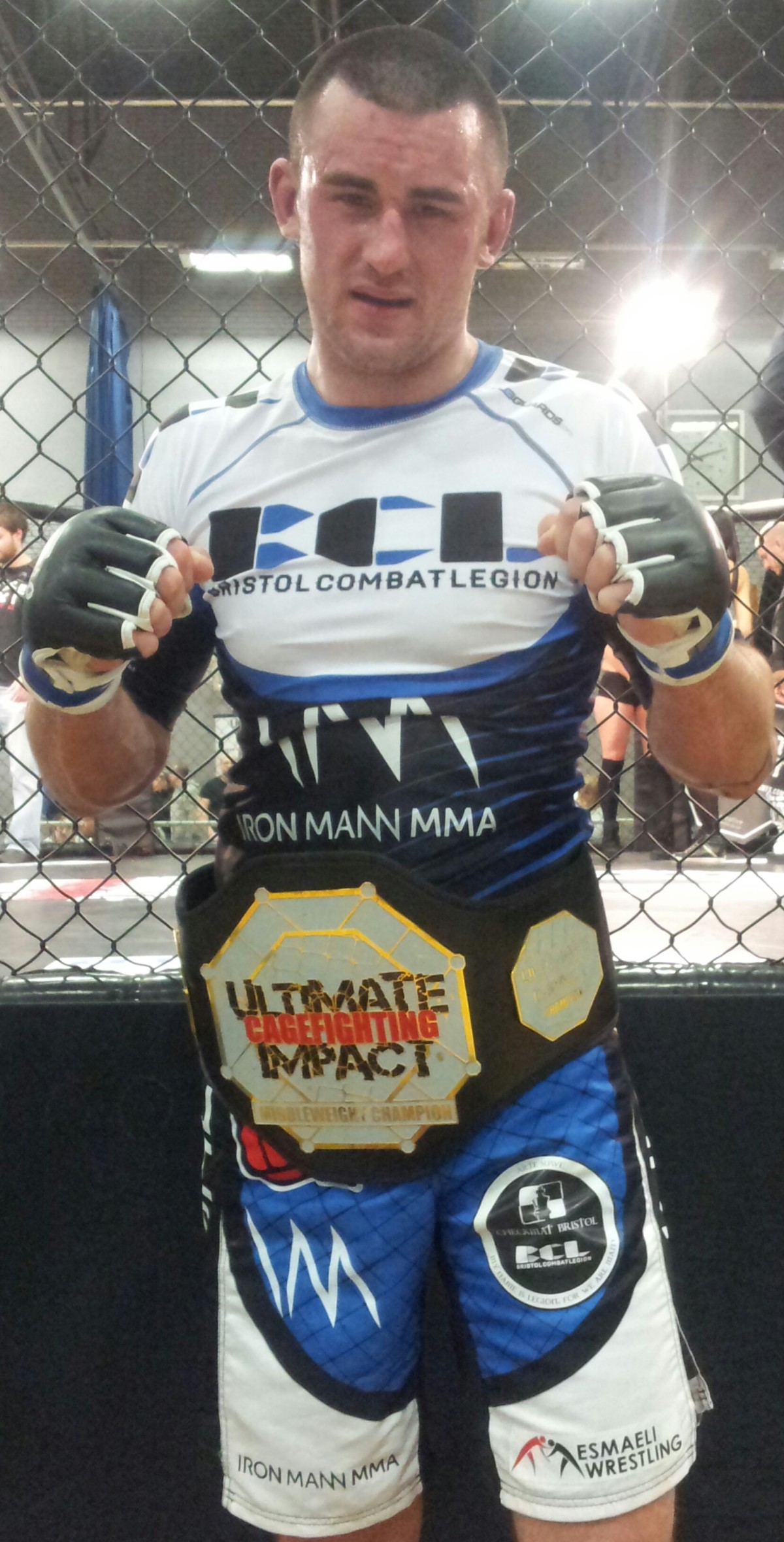 `Ultimate Impact 11 held their first event of 2014 Benskin VS Cook 2  at their new location of GL1 Leisure Centre in Gloucester on Saturday 22nd February to an electrified, pumped up full house.

With six K1 fights on the card including four female K1 fights and seven MMA fights, Paul Sutherland and Dan Richards had definitely pulled this one out of the bag yet again with each show just getting better and better.

Referee’s Ron Frith and Leon Roberts were the third men in the cage and MC for the night was Darren Rees.

It was time to get the first fight underway and the atmosphere of the crowd in the new home of UIC, you could already start to feel the warm, electric vibe.

Rnd 1 Both men are straight of out  the cage but it’s Shore who gains the TD and quickly moves into side control and then top position raining blows on Price who is trying to defend the flurry of shots and whilst doing so turns onto his stomach. Shore is controlling the action from the outset, and then sealing Price’s fate with a RNC at the 2min 3sec mark of Round 1.

Rnd 1 Elkova straight in with kicks in this fast paced opening few seconds. Malina pushing forward as the aggressor and drops Elkova, then Malina comes in with a lovely superman punch using her clean timed punches well. Elkova moving forward using her punches and making good use of her sidekicks.

Rnd 2 Both women come out fast, Malina coming forward with her punches and starting to use more of her leg kicks, Elkova Is starting to come into her own as both women trade alike, Malina with a great spinning back fist, Elkova moving forward and making this a two-sided affair.

Rnd 3 Elkova straight in with a one, two combination followed by Malina landing a spinning back fist and a flying knee in this fast paced round.  Both women have a sense of urgency about them in this final round with neither giving an inch as the sound of clappers go for the last ten seconds Malina drops Elkova.  WINNER VIA DECISION PAULINA MALINA

RND 1 Both women come out fast; Trevena making use of angles whilst Fendt is stalking down her opponent, Trevena is in and out, circling off to the side as Fendt is still finding her range and rhythm but also landing some awesome kicks and punches in the process.  Trevena has landed her own shots this first round and it is definitely not a one sided affair.

Rnd 2 Trevena is out first and lands with a front kick for which Fendt replies with a brutal sidekick, Trevena drops to her knees in agony.   Referee Ron Frith checks Trevena is able to carry on – all the while Fendt’s corner are shouting at the ref for allowing ‘too much time’ and Trevena’s corner are telling her to ‘suck it up’ but the look on Trevena’s face tells a different story!  With Fendt knowing she had done damage, she finds her rhythm coming forward landing brutal knees and kicks just as it signals for the end of the round.

Rnd 3 Fendt having found her earlier momentum and rhythm she is straight back where she left off  throwing some brutal leg kicks and knees then threw an awesome head kick which KO’d Trevena at 1min 01 sec Rnd 3. WINNER LEA FENDT VIA KO

Rnd1 Abulafur is straight out with punches, Figlak attempts an TD but Abdulafur pulls guard, Figlak in side control then gains top position where both men are working battling it out, Figlak being the dominant one with top position but Abulafur also working hard from bottom position.

Rnd 2 Figlak straight out and gains the TD, working hard from mount only for Abulafur to get back to his feet briefly and Figlak take him down again although whilst doing so Abulafur has made the error in leaving his arm out and Figlak  capilatizes on this but to no avail. Figlak gains another TD and continues to control Abulafur from mount.

Rnd 3 Figlak comes out punching and gets the TD, working from mount controlling Abdulafur this is far by means a one sided affair as Abdulafur is holding his own in this well evenly matched fight. 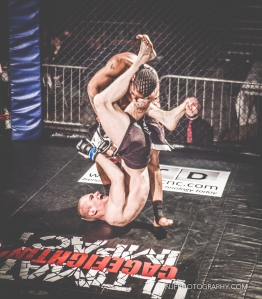 Rnd 1 Both men come out fast and are going for this like there is no tomorrow, it is constant action from the beginning with neither man not backing down. Both men are looking fierce but i’m sensing  Harthill is just wanting it a bit more in this very even first round.

Rnd 2 Sansom comes out and lands an awesome high kick but its Harthill that is like a man possessed, then at  1min 16 secs  Harthill KO’s Sansom. WINNER MATT HARTHILL VIA KO 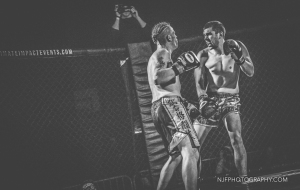 Rnd 1 Both men opened up with exchanges of kicks, Wallace gains the TD whilst Grant is working of his back looking for a submission, sees a small opening for an arm triangle and attempts to secure the position but to no avail.

Rnd 2 Grant opens the round with kicks and Wallace returns the favour an awesome sidekick as he does Grant comes rushing forward, there is a scramble of some sorts, I am yelling Wallace watch for the guillotine, next you know, Grant seals the deal with the Guillotine at 0.25 secs Rnd 2.

Rnd 1 Both women come our fierce, with pure intention, working there kicks and solid knees whilst in the clinch position, Donnelly lands a lovely spinning back fist whilst Harper appears to be keeping it basic and trying to find her range in this first round.

Rnd 2 Both women come straight out firing shots at one another; Donnelly is really mixing it up well, Harper has now found her range and is landing more of her strikes on target but that is not to say Donnelly is not in this fight, quite the opposite.   Donnelley is coming back with counter punches and knees of her own, making this a very even fight at this point.

Rnd 3 Harper has found her rhythm and Donnelly appears to have been caught in Harpers clinches and been dealt some of Harpers knees, just when you think Donnelley is backed up against the cage she comes back and dominates the last 15 seconds or so of this very evenly fought fight.

Rnd 1 Great opening round for both men, both men are feeling each other out, Sakhizedeh teeps Jones straight in the face but this does not faze Jones, he is still moving forward throughout the first round and neither man is not backing down.

Rnd 2 Sakhizedeh straight in and shoots, gains the TD, working in top position as Jones is moving back to his corner against the cage on his back then is back to his feet. Sakhizedeh shoots in for another TD just before the end of the round finishes.

Rnd 3 Sakhizedeh comes out and get Jones in a great Arm Drag Wrestling move for which the crowd go wild, Jones is straight back to his feet, Sakhizedeh has Jones against the cage working for a position but to no avail. The action moves towards the centre of the cage, Sakhizedeh shows more of his great pedigree background in wrestling.  Jones puts up a terrific fight but he was just out wrestled on the night.  WINNER AMAN SAKHIZEDEH VIA UD

Rnd 1 Finney straight in with a one, two combination and knocks Evans down Finney on top raining blows.  Evans manages to get back up and both men are going back at it, there’s a scramble and Evans attempts an guillotine, Finney escapes by cage walking – but you really had to see this ‘technique’ he pulled off to escape back to his feet.  As soon as they are back to their feet neither man is backing down, it again goes back to the ground and both men are fighting hard for Top position, Evans sees Finney has his arm out during one of their many ‘roll’s to gain Top position  and takes it at  4min 24 secs Rnd 1

Rnd 1 Both men come out with a striking clinic and neither man is backing down. Kaufman drops Smith in the last seconds of the rounds with a brutal leg kick.

Rnd 2 Smith lands a brutal leg kick that drops Kaufman who does a celebratory jump, which is a bit premature as Kaufman recovers and comes back fighting with a lot more intent.

Rnd 3 Smith lands a great right that dropped Kaufman but Kaufman is not shying away and is still pushing the action forward in this action packed fight.

Rnd 1 Bousiff straight out and catches Astley with a left hook which drops him, Bousiff is straight on Astley to finish the job in hand, landing several shots before referee Leon Roberts calls a stop to the fight at 0.19secs.  WINNER ADAM BOUSIFF VIA TKO

Rnd 1 Both women come out fast, Handy finding her target with her long reach and constant jabs and punches early on.  Baker being the more cautious fighter and using her kicks to start with. Handy gets Baker with one of her awesome knees and drops Baker in this opening round.

Rnd 2 Baker is out first and is using her kicks to reach Handy and it’s clear you can see Baker’s kicks have been damaging as I notice a big red mark on Handy’s left outside thigh.  Handy is pushing forward with her awesome punching making Baker work against the cage; this is a great display of who wants this title eliminator the most in this second round.

Rnd 3 Handy straight out and in with a one, two combination followed by her awesome knees and even more punches, making Baker work off the cage. This is not a one sided affair Baker is giving Handy her own share of kicks and punches which seems as Handy is coming under fire a little in the dying seconds of the final round, as she has Baker against the cage wall. Both women give it their all in this all-out war and leave everything in the cage.

Rnd 1 Cook shoots in and gets Benskin down, Cook on top and looking for a position all the while Cook is grinding out punches to Benskin, it gets back to their feet and Benskin is raining in some short sharp elbows to Cook’s head.  Cook then gets Benskin to the ground and throws his own punches on Benskin, showing just how much this Title fight means to both men. Benskin has managed to stop quite a few of Cook’s TD’s and only two have been successful in this opening, exiting round.

Rnd 2 Cook again shoots in and Benskin defends the TD perfectly and replies with short harsh elbows to Cook’s head.  Cook has Benskin against the cage and is throwing knees, and for a brief, second it did appear Benskin was in a bit of trouble but Benskin rolled out of it, Cook got straight back on Benskin raining blow after blow and even some nasty elbows.  Benskin is covering up at this point and Cook rolls him over and attempts a RNC to no avail.  Benskin turtles up and weathers the storm and the remainder of the round.

Rnd 3 Cook comes straight out and in for the TD for which he briefly gets as Benskin is straight out into side control against the cage.  Benskin trying to land punches but Cook has hold of his wrist and therefore gains wrist control although a few of Benskin punches manages to get through, Cook gets out and gets Benskins back only for Benskin to roll to his front.  Cook now in Top position, both trying to gain punches, Benskin gets Cook rolled over and he is now on Top in this ‘topsey turvey’ last few moments of this exciting Title Fight. It is clear to say that neither man wants to lose this fight. This fight had everything from start to finish and both men left everything in the cage.