Piotr Ptaskinski will be making his return to the octagon this weekend after two years away from the sport at Ultimate Impact Championship 16 this Saturday, November 14th at GL1 Leisure Centre in Gloucester, in a K1 Title fight against Craig White.
The 33-year-old, originally from Poland who now resides in Worcester, Worcestershire has only been competing in professional MMA for the last five years, but I guess realistically you could actually say only three years with his last two years out of the sport due to injury and having no motivation or hunger for the sport during that time.

Piotr Ptaskinski will be making his return to the octagon this weekend after two years away from the sport at Ultimate Impact Championship 16 this Saturday, November 14th at GL1 Leisure Centre in Gloucester, in a K1 Title fight against Craig White.

The 33-year-old, originally from Poland who now resides in Worcester, Worcestershire has only been competing in professional MMA for the last five years, but I guess realistically you could actually say only three years with his last two years out of the sport due to injury and having no motivation or hunger for the sport during that time.

Before his two-year hiatus, Piotr fought for established European promotion Cage Warriors for which he had a career that consisted of 2 wins and 2 losses which brought his impressive welterweight record to 5-4 inside the octagon for professional MMA.   Now fully healed, full of motivation and more hungrier than ever Piotr has decided to make his comeback in a K1 middleweight title fight.

“I have always liked stand up and although I have been away for two years I have been training in K1, Kickboxing and Muay Thai, so this to me was the perfect option for me to come back to with a great opponent in that of Craig White to showcase both our skills.”

Having watched several of Piotr’s fights myself, I for one know that he never takes a backwards step in the octagon and is always coming forward no matter what is being thrown at him.  I guess this is where his love of the sport definitely comes in and makes him a fan favourite to watch in whatever promotion he his competing in at the time.  Whenever Piotr competes you can usually guarantee there will be ‘beautiful violence’ involved.

“Whilst competing for the promotion Cage Warriors I did get given the nickname ‘The Polish Zombie’ after my fight with Moshen Bahari, at one point there was just blood coming out of my eyes but the polish zombie is not my real nickname (infact it is current TUF 22 competitor Marcin Wrzosek nickname) my nickname is ‘Iron’ given to me by Paul Sutherland after my fight with Daniel Brzozowski who knocked me down in the first round, twice, and I came back to finish him in that round in 2 mins via Armbar.  That was when I was given my fight name of ‘Iron’.”

Although you may only recognise Piotr’s name from the MMA scene, you can be forgiven as although K1, Kickboxing and Muay Thai are the disciplines he prefers to compete in and for which he has done so previously in-between his MMA days,  his last competitive K1 fight was in Spain three years ago for which he won and then he promptly carried on with his MMA way of life.

Being blessed in both disciplines of K1 and MMA and seeing now that Piotr’s motivation and clear hunger for the sport had worked its way back to him and having a ‘rebirth’ into this forever evolving sport the question now is what is the ultimate goal for which he would like to achieve within the sport.

“I don’t know at the moment as I don’t look too much into the future. I’m just looking at this Saturday and taking this belt, this is my ultimate goal at the moment.”

Training out of renowned Cheltenham Trojan Free Fighters under the guidance of head coach Paul Sutherland and Conditioning guru Matt Ewin who is known for his crazy hill sprints, Piotr’s level of training just keeps adding more explosive sets of weapons to the ever-growing arsenal of tools that he has already and is forever expanding into his growing tool box.

“The secret in Trojans being a really good teaching gym is the head coach, Paul Sutherland.  He is one of the best coaches in the UK and the gym has a great training programme for every person.  Paul Sutherland is the key to Trojans he is the Glue.”

For this specific training camp Piotr has travelled around a few places to get the ‘best of the best’ training and it all started in Poland where he trained at Tomasz Drwal gym who happened to be a pioneer of MMA in Poland and was the first Polish person in the UFC.  Piotr’s next part of his camp was then spent with UIC 15 WW K1 Champion David Willmot at Team Tieu Cheltenham and then finally onto sparring seasons with  former UFC and Cage Warriors athlete Chè Mills,  not forgetting his daily training sessions with Paul Sutherland at Trojans.

“I was over in Poland for ten days training with Tomasz Drwal at his school which was just really good, having around 7/8 sparring partners my size training in boxing and kickboxing, it was a great experience. Training with David Willmot for whom is a multiple K1 champion, well, you couldn’t ask for any better and as for getting to train with Chè Mills he is 6ft tall just like Craig White but I feel Chè’s striking is world-class, in my opinion.  If you want to beat the best you must train with the best.”

As we start to talk about Polish fighters with the date being the 14th November when Piotr himself is due to compete, there is also another Polish fighter who goes by the name of Joanna Jedrzejczyk competing on the same night for a title belt defence, it would be rude of me not to at least test the waters on this subject.

“Joanna Jedrzejczyk is such a beast and I have been a watching her since I saw here compete in Cage Warriors.  We polish are very proud.  Although Valerie Letourneau may not be all together an easy fight, Joanna is still a different type of beast, her confidence is great and she will be unstoppable for a long time to come.”

Piotr would like give a shout out to his sponsors:

And also wanted to thank everyone who has supported him.  Who has helped him with his preparation, training, motivation and inspiration.

Tickets will be available on the door and online here

Ultimate Impact returns for their sixteenth event held at GL1 Leisure Centre in Gloucester this Saturday, November 14th with what promises to be another fantastic event to close the year out.

Headlining the event will be Marc Allen defending his lightweight title against UK MMA veteran in Jordan Miller.  The co-main event will see reigning UIC MW MMA champion Craig White compete for the UIC MW K1 Title against Piotr Ptasinski in which promises to be a bout containing ‘beautiful violence’.

Also featured on the card is former lightweight champion Wayne Drake who takes on Aaron Khalid and current K1 champion Laura Handy who will be competing in an amateur MMA bout.

Here is the fightcard as it stands.

Limited tickets available on the door subject to availability

Here is  a quick look at the full results with a full event coverage to follow shortly.

Fight of the Night

Submission of the Night

Ultimate Impact takes place for their fifteenth event this Saturday night at the GL1 Leisure centre in Gloucester for which promises to be one of their most action packed cards to-date.

It is also worth noting that Mark Finney is donating all of his Fight Purse and 75% of his ticket sale commission towards the Hollie Garrard Trust whose life was tragically cut short at the hands of her ex-boyfriend. Click here for further details about Hollie and click here to contact Mark for direct ticket sales via his Facebook account.

Also David Willmot is donating his fight purse to The Nelson Trust Drug and alcohol Rehab Centre in Brimscombe, Stroud. You can additionally help by going to David’s ‘Just Giving’ page here and donating whatever you can to help out. Below David left this message on his Facebook page.

So I’m fighting Saturday in Gloucester, the purse I’m donating to the Nelson Trust Drug and Alcohol Rehab Centre in Brimscombe, Stroud to help people beat the demon that is addiction. The more we can raise, the more lives we can save. Addiction destroys lives, families and communities, one person can’t do everything but together we can do something. I’m not fighting for me, I’m fighting to make a difference.

If you have not purchased tickets yet and still need to, you can obtain them from Ultimate Impact Events Online here, any of the fighters mentioned above or there are limited tickets available on the door.

Please note that tickets on the door may be subject to a surcharge.

On Saturday June 28th, Ultimate Impact held there 12th event at GL1 Leisuire Centre in Gloucester, to an aswesome, hyped up, vocal crowd.

With three title fights on the card this was one not to be missed, and boy, it lived right up to its name, in fact, the current two MMA title holders lost their belts, two NEW TITLE holders were crowned and of course we had the ladies first ever K1 Flyweight Title fight.

This night did not disappoint, from the amateurs at the start of the card, right through to the Pros on the card, infact with every event it is getting harder to top the last one!  I cannot wait for #UIC13 on November 15th at GL1 Leisure Centre.

Here are the Official Results: 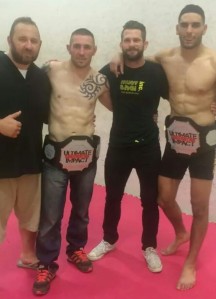 Laura had this to say after her hard earned win:

Awesome feeling when all the hard work pays off!!

Thanks to my coach Ryan Norwood for all the time and effort and to my good looking corner men!  Well done to all the other Fury Fighters, win or loose your all awesome.

Next Event is #UIC13